Among the most biologically diverse watersheds in Pennsylvania, and a a federally designated National Wild and Scenic Recreation River, the Allegheny River in western Pennsylvania has been voted the 2017 Pennsylvania River of the Year.

The general public was invited to vote online Nov. 14-Dec.19, choosing from among four waterways nominated across the state. Results were announced jointly today by the Department of Conservation and Natural Resources and the Pennsylvania Organization for Waterways and Rivers (POWR).

“Pennsylvania is blessed with several large, iconic rivers and the Allegheny’s attributes are many, diverse and known so well to to the thousands who fish and paddle its rebounding waters and hike, bike and camp along its banks,” said DCNR Secretary Cindy Adams Dunn. “So rich in scenic beauty and historical significance, the Allegheny River is deservedly one of western Pennsylvania’s natural treasures.

“The Allegheny and the other three waterways nominated for 2017 all highlight our state’s wealth of rivers and streams, and its core of dedicated folks who fight to protect them.”

“Through planned River of the Year celebrations, public awareness of the river’s value will be increased and major initiatives along this section of the river will be underscored,” Dunn said. “Economic revitalization of river-town communities will enhance access to the river; increase tourism; and provide additional land and water-based recreational opportunities for local residents and visitors alike.”

In cooperation with DCNR, selection of public voting choices was overseen by POWR, an affiliate of the Pennsylvania Environmental Council.

“POWR would like to commend everyone across the state for their support for the nominated rivers,” said POWR Vice President Janet Sweeney. “The River of the Year program is a wonderful opportunity to showcase all of the nominated rivers and the great work being done in Pennsylvania communities on these valuable resources.”

POWR administers the River of the Year program with funding from DCNR. Presented annually since 1983, the 2016 River of the Year designation was awarded to the Susquehanna River North Branch in northeast Pennsylvania.

“Win or lose, it was going to be a great opportunity to create public awareness of the value of our waterways and engage the public to support the importance of the Allegheny River as a huge asset to our region,” said Wes Ramsey, executive director of Penn Soil Resource Conservation and Development Council. “We are also extremely grateful to DCNR, POWR and the many partner organizations, businesses and private citizens that helped in creating public awareness and encouragement of people to vote for the Allegheny River that led to its selection as the 2017 PA River of the Year.”

“Every year, thousands of people paddle down this beautiful river,” Ramsey said, “and winning this designation helps us focus more attention on its history; the value of clean water; its biological diversity; the recreational opportunities it provides; and the economic value of the Allegheny River to our region. Through public educational and recreational events and projects in the coming year, we hope to increase public awareness and participation in activities which will lead to increased stewardship of our natural resources.”

About The Allegheny River

Home to an increasing bald eagle population, the Allegheny River flows more than 315 miles through the state, including a portion of the PA Wilds. With a watershed area of 11,580 square miles, it contributes 60 percent of the Ohio River flow at Pittsburgh. Eighty-six miles of the Allegheny River — from Kinzua Dam to Emlenton — are a federally designated National Wild and Scenic Recreation River, containing seven islands that are protected under America’s National Wilderness Preservation System.

The River of the Year sojourn is one of many paddling trips supported by DCNR and POWR each year. An independent program, the Pennsylvania Sojourn Program, is a unique series of a dozen such trips on the state’s rivers. These water-based journeys for canoeists, kayakers and others raise awareness of the environmental, recreational, tourism and heritage values of rivers. For more information about the sojourn program, visit pawatersheds.org. 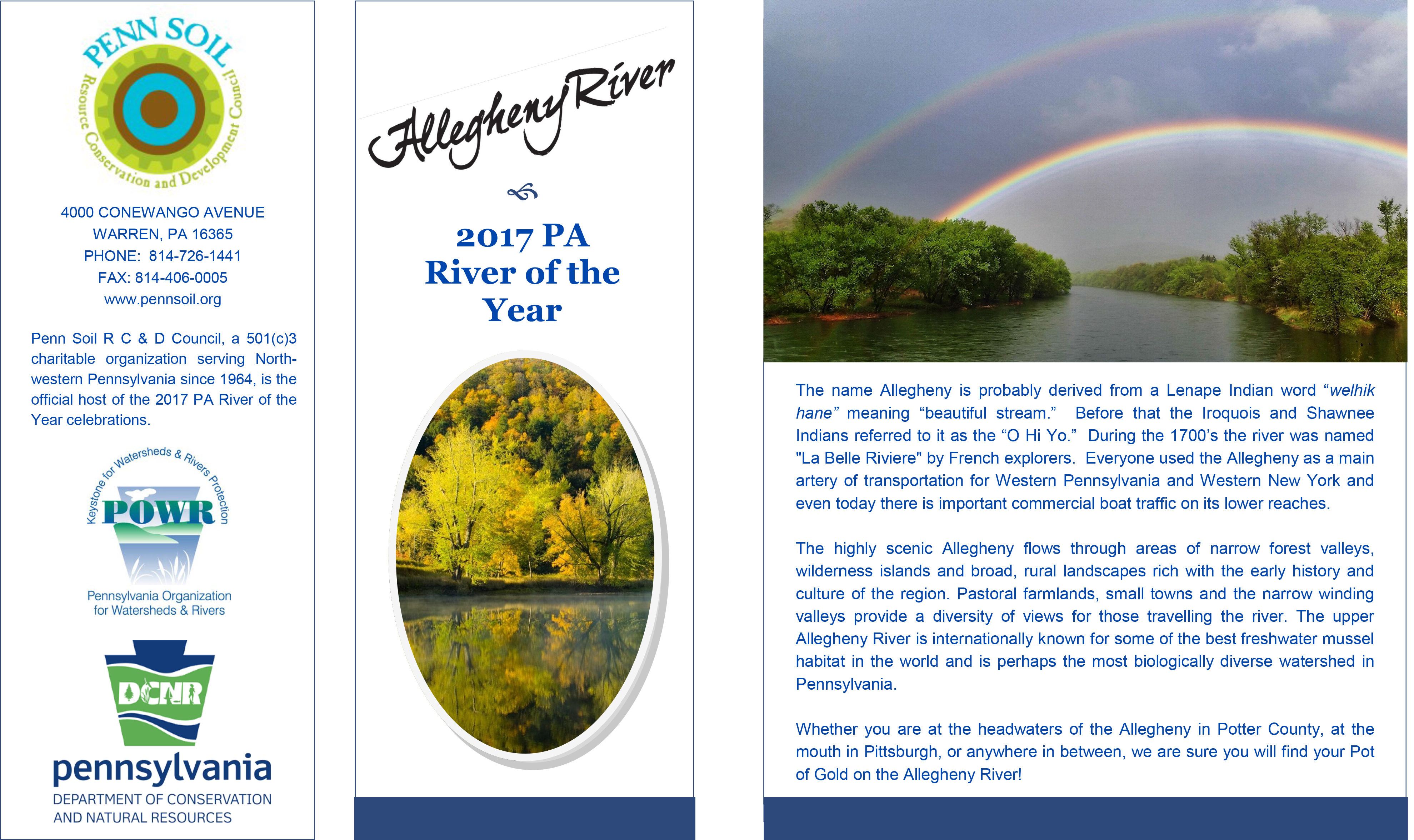 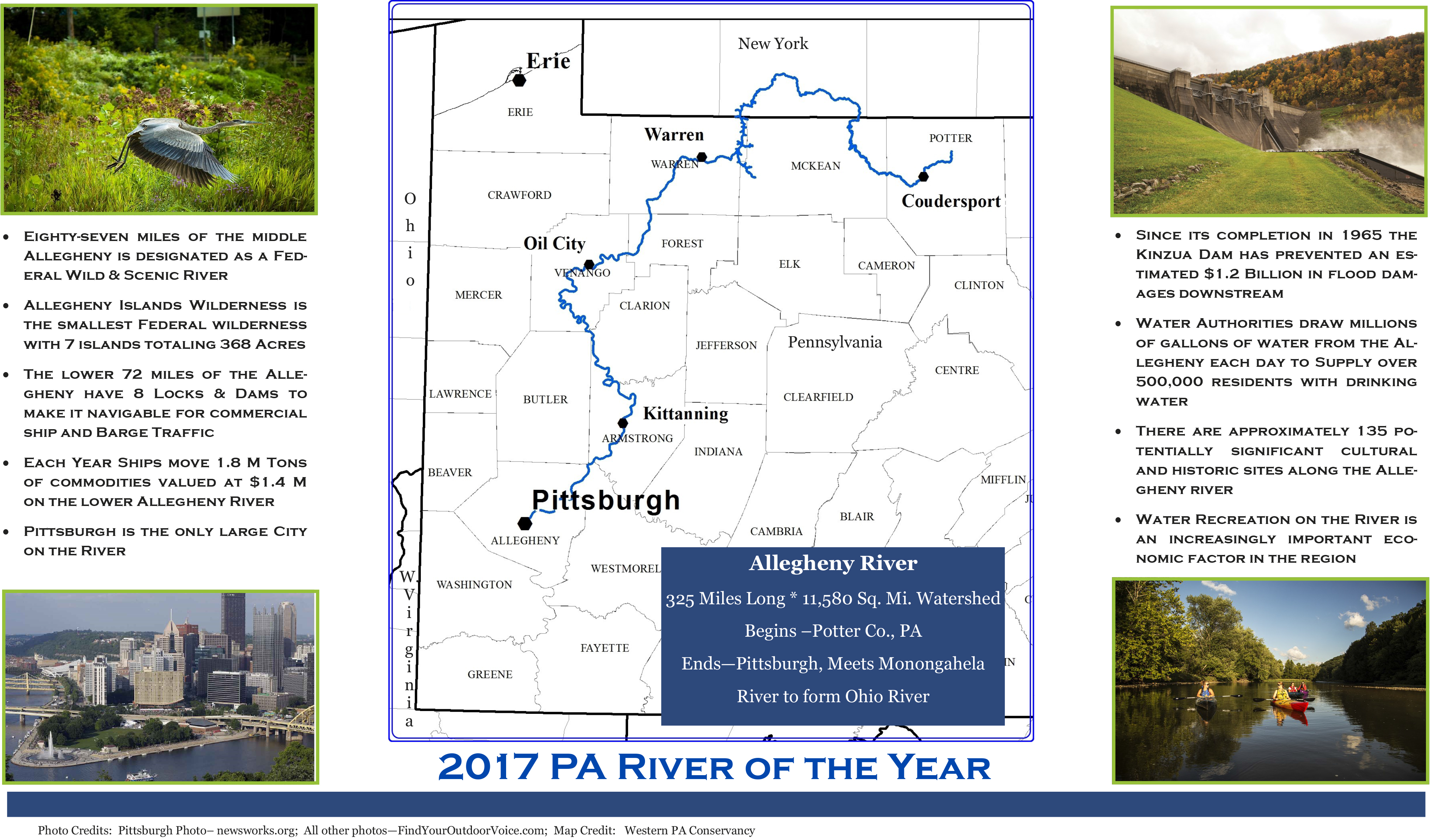